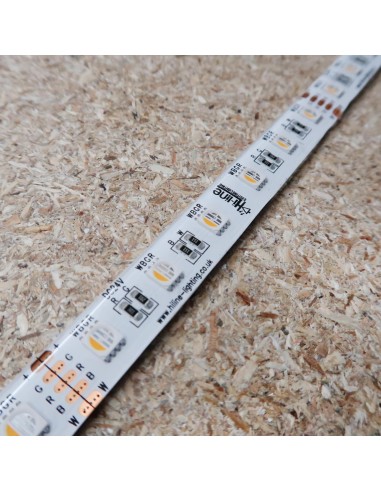 Notify me when available

Want it Tomorrow? Order it within
12:34:56
and choose "UPS Next Day" at checkout (Select Saturday delivery where applicable) Order now and it'll be dispatched
02-06-2020

Our 12mm LED strips are powered by 3oz high copper flexible PCB, which makes it possible to maintain a cooler operating temperature despite very high brightness. This also ensures less voltage drop, which is useful for installations which require longer runs; up to 10m can be powered from one end only, without causing a noticeable reduction in brightness. Overall, 12mm results in a longer lifespan of the LED strip, with a consistently strong performance throughout.

This new design of RGBW LED strip integrates all 3 primary colours (Red/Green/Blue) + Warm White in a single chip. Due to this innovative design (4 in 1 chip), the strip is brighter than the conventional RGB + W strips, which have one chip for RGB and another one for white.

The RGBW LED strips are powered by high-quality quad SMD5050 LED chips. The brightness of each chip is 20 lumens.

The power consumption is 14.4W per meter, which means an average of 3.6W per colour per meter.

Fitted with an easy to install original 3M adhesive tape with excellent adhesion (identified by a red protective strip on the adhesive side).

Due to the high quality of Hi-Line LED strips, there is very low decay, which increases the LED strip's performance and ensures that a high level of brightness is kept constant throughout the LED strip's life.

The RGBW LED strip comes with a 15cm wire ending on each side of the strip roll. Therefore, no extra soldering is required if the roll should be cut into 2 different pieces (i.e. 3 meters + 2 meters).

Installation hints and tips for LED strips can be downloaded at the bottom of this web page.

Although soldering is a recommended option for the connection of LED strips, Hi-Line’s 12mm IP65 solder-free connectors offer the best solution currently available on the market.

This data is based on the average readings for a 5-meter long LED strip. If the length of the strip is 1 meter the power consumption will be higher, as there is almost no voltage drop. For comparison, the test result for 1m RGBW LED strip with 14.4W and 60 LEDs showed a power consumption of 18.48W or 0.77A.

The great advantage of this protective layer is that the luminosity of the LED strip is not affected and the LED strip can be easily cut and soldered. But the most important advantage of this Polyurethane layer is that it makes it possible for the strip to be used inside enclosed spaces such as signs, while the temperature is not an issue since PU acts also as a coolant for the chips.

All Hi-Line LED strips are dimmable. Please select a suitable PWM LED dimmer/controller to ensure the proper dimming of the LED strip.

All Hi-Line RGB and RGBW LED strips are fully compatible with Fibaro RGBW LED Controller, Rako or ANY conventional anode LED controller available on the market.

Selection of the LED driver depending on the maximum LED strip length:

The table below shows the maximum LED strip length, which can be operated with a given LED driver.

To consider the best power supply performance, 20% should be deducted from the maximum strip length in the table below. 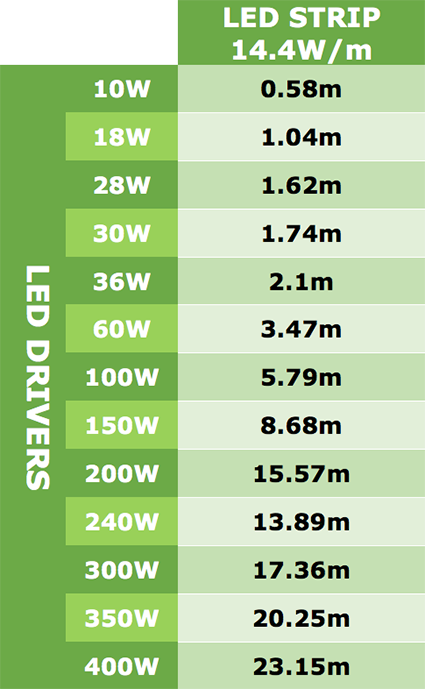 Note: for driving RGBW LED Strips, you will have to combine the LED-Driver with an RGB/RGBW LED Controller.

In such cases, the LED driver is not required to be dimmable. Brightness control (dimming) and colour adjustment is still possible through the LED controller.

No customer reviews for the moment.

Advice on the LED strip installation